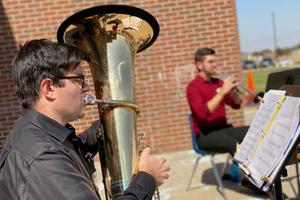 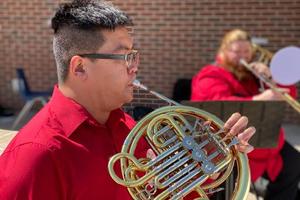 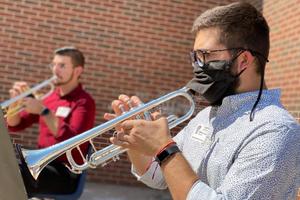 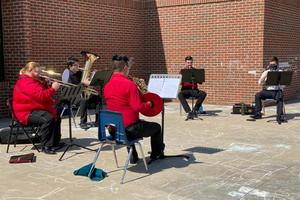 Last week the Lubbock Symphony Orchestra (LSO) Brass Quartet played for Westwind students in Colleen Wardlaw’s third grade music class. This is the fifth year the group has played a live concert for students at Westwind.

Wardlaw said that a few years ago the LSO Education Director reached out to her about having some of their smaller groups going to the campus to play for the students and educate them about their instruments. She said this year was no different.

“The brass quintet played for thirty minutes and it was a medley of different pieces from movies that the kids might know such as Harry Potter, The Sound of Music, The Lion King, and The Incredibles,” Wardlaw said. “They held up each instrument to show the kids and explained what it was, if the pitch was high or low, and they played a little bit on each individual instrument to show the kids what each one sounded like.”

Wardlaw said this experience is one-of-a-kind for her students. She said many students are visual and kinetic learners, so seeing the musicians perform in person takes her instrument lessons to the next level.

“It is one thing for me to show them a picture of an instrument and play a recording of that sound, but it is an entirely different experience for them to see and hear the instruments in person,” Wardlaw said. “These events help the children improve their listening skills and audience etiquette.”

Wardlaw said this performance also teaches the students about how working together is a crucial part of music. She said it is neat to watch the students realize how many instruments and musicians it takes to be a part of the songs they hear on the radio and television.

“They can see that each instrument is an integral part of the overall sound,” Wardlaw explained. “The tuba by itself might not sound interesting, but if you remove it from the brass quintet, the songs are missing a very important bass line that changes the entire sound of the song.”

Wardlaw said she teaches the students to relate the lesson of inclusivity into their own daily lives.

“It is necessary for the kids to see that every single person matters and is very important to a group,” Wardlaw said. “Seeing them make that realization is my favorite part of this experience.”

Wardlaw said because of COVID concerns, this year the concert took place outside on the school’s blacktop. She said this made it possible for the kids and musicians to have plenty of space to spread out. “We had the fresh air blowing and the kids could sit with some space between them,” Wardlaw said. “The performers wore their masks when they were not playing, and they spaced their chairs out six -feet so that when they were playing and not wearing their masks, they were still pretty far apart.”