Meet the Frenship ISD School Board of Trustees 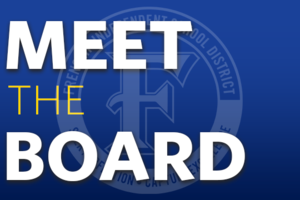 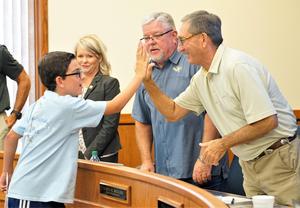 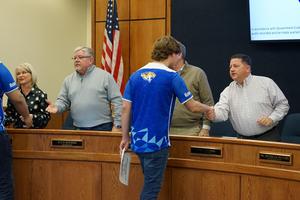 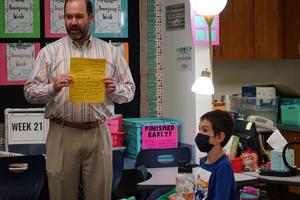 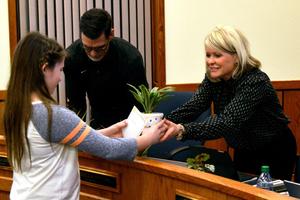 Frenship is honored by the service and dedication of our seven school board members. This group acts as the school district's policy-making board and is the official representative of the people for all public education in Frenship ISD.

Because January is School Board Recognition Month, Frenship is celebrating this year's theme of "Navigating to Success " by reaching out to thank these seven individuals for all that they do to improve our school district.

Learn more about their “day jobs”, their involvement in the community, and how Frenship is part of their lives.

Mr. Draper has been a board member since 2004 and is the current Board President.

Mr. Draper graduated from Monterey High School and attended Texas Tech University. He has a 32-year career in the Building Development industry and is the Vice President for ARMKO Industries, INC., a professional engineering firm.

He and his wife Lynda were married in 1987. They have two daughters – Ashlee, a 2007 Frenship graduate, and Kinsey, a 2008 Frenship graduate. They are also the proud grandparents of two adorable granddaughters, Kennedy and Adalee and twin grandsons, Jax and Rogue.

Mr. Draper’s family attends church at Southcrest Baptist Church. He and his family enjoy the outdoors and fishing.

Mr. Miller has been a board Member since May 2006 and is the current Board Vice President

Mr. Miller is currently employed at Stellar Construction. He has more than 30 years of experience with new development working closely with project engineers, architects, and local building officials. David has a Bachelors of Science in Engineering Technology from Texas Tech University.

Mr. Miller is involved in several civic and community organizations in conjunction with serving on the Frenship ISD Board of Trustees.

He has one daughter, Kelsey, a 2008 Frenship High School graduate. She lives in Austin where she works as a Certified Behavior Analyst.

Mr. Rogers has been a board member since November 2011 and is the current Board Secretary.

Mr. Rogers is a realtor with Re/Max Lubbock. He is married to Dana, a 1st grade teacher at Frenship's North Ridge Elementary.

He currently serves on the South Plains Food Bank Board of Directors and is a member of the College Baseball Hall of Fame Board. He also currently serves as a board member for the Frenship Foundation for Leadership. He also is the voice you hear over the loud-speaker at Frenship Varsity Football games!

Mr. Rogers has said that his most rewarding experiences while serving on the board has been to stand on stage during a graduation ceremony for FHS or the Reese Education Center and honor the students that have completed this chapter of their lives.

Mr. Robinson has been a board member since November 2013.

Mr. Robinson has been married to his wife Angela for 34 years. Angela also serves Frenship as a resource/math inclusion teacher at Oak Ridge Elementary. They have two sons, Matthew and Riley, who are both Frenship High School graduates.

The Robinsons are members of Wolfforth United Methodist Church. His hobbies include hunting, golfing, and supporting Frenship activities.

Mrs. Newsom has been a board member since 2018.

Mrs. Newsom is Senior Vice President and Chief Risk Officer for City Bank in Lubbock. Her responsibilities are overseeing the bank’s Enterprise Risk Management Program, and she is also an officer in the bank’s holding company, South Plains Financial, Inc. She has a 24 year banking career, with 20 of those at City Bank.

Mrs. Newsom is an active volunteer for many organizations including Kappa Delta Sorority of Texas Tech, Meals on Wheels, Bacon Heights Baptist Church, Lubbock Women’s Club, and Hockley County 4-H. She is also the Past-President of the Frenship Foundation for Leadership, where she has served for five years.

Mrs. Newsom graduated from Texas Tech University with a B.S. in Agricultural and Applied Economics. She is married to John and has one son, Rex, who attends Frenship High School.

Mrs. Phillips has been a board member since December 2015.

Mrs. Phillips is in-house counsel at South Plains Electric Cooperative, Inc.  She graduated with a Bachelors of Science in Agricultural Economics from Texas Tech University and earned her Doctor of Jurisprudence from the Texas Tech School of Law.

Mrs. Phillips served as past chair of the Lubbock County Hospital District Board of Managers, the National College Baseball Hall of Fame Executive Committee and the Frenship Foundation for Leadership. She is also a past member of the Texas FFA Board of Directors and has served on the Frenship PTA Boards for four different campuses.

Mrs. Phillips and her husband Ronald, who is Chief Compliance and Security Officer at Texas Tech, have been married 29 years and have four sons. Austin is a 2019 graduate of Frenship High School, Grant and Gavin are juniors at FHS, and Holden is an eighth grader at Terra Vista Middle School.

Mr. Cox is the newest member of the Frenship ISD Board of Trustees and was appointed to the board in June of 2020.

Mr. Cox is a Lubbock native and Coronado High School graduate. He received his Bachelor of Business Administration in Accounting from McMurry University. He currently serves as the Chief Accounting Officer for Madera Residential.

Mr. Cox and his wife Susan, also a Coronado High School graduate, have been married for nearly 20 years. They have three children, Drew and Brooklyn who attend Terra Vista Middle School and Morgan who attends Legacy Elementary.

Highly invested in the future of Frenship, Andrew recently served on the Frenship ISD Long Range Planning Committee to help address Frenship’s future growth and facility needs for the District.

Andrew loves sports and being outdoors. He coaches girls and boys youth soccer and basketball. His family is also very involved at their Indiana Avenue Baptist Church where Andrew serves as the Chairman of the Personnel Committee and his wife sings on the Praise Team and teaches youth Sunday School.